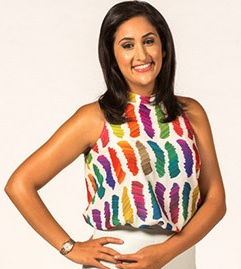 This week in the #CommsCorner we chat with Del Irani, a Presenter on ABC News Breakfast, which airs from 6-9am nationally. As well as being a TV and radio presenter, Del is a highly experienced and sought after event host, moderator and emcee. She has recently returned from moderating for the United Nations’ International Labour Organisation in China, and was also the host of our client’s Shared Value Forum in April. Del is also a board member of the Western Bulldogs Football Club Community Foundation.

What’s your elevator statement – who are you professionally and personally?

I’m a warm and energetic TV presenter who has hosted shows in Australia and around the world. I currently work for ABC News in Australia and was a former BBC News Presenter working as a correspondent in Mumbai, India. I am an Indian-Australian who has lived and worked in more than 20 countries.

Tell us about a typical day working in the media?

There is no typical day. From the time my alarm goes off at 3.30am, I check my phone for news alerts and read up on any developments overnight. Then I arrived in the office just after 4am, flick through the papers and talk to the producers about the main stories they’ve identified for the show. After a brief chat and informal editorial meeting, I start writing my scripts and lining up the vision. Then it’s off to hair and makeup. Once I’m ‘studio ready’, I update my scripts, particularly the financial markets which are closing at 6am, and I’m on air by 6.05am.

When did you first know you wanted to be a journalist?

I really didn’t know. I didn’t study journalism. I studied business and psychology. However, when I graduated from the University of California, Berkeley, I was offered two graduate positions. One was in the corporate world and the other one was for an obscure media production company based in Belgium that required a lot of travel and being a fresh graduate at the age of 22 I decided to take the latter. It was only after working for this company for several months I realised I was often the only one at press conferences who would be standing up and asking questions or challenging the status quo. Many of my colleagues pointed out that I had a natural gift for interviewing, and it was after these experiences that I decided to pursue journalism.

Which journalist from around the world do you most admire?

I really admire Christiane Amanpour who has worked her way up from an entry level desk position to being the Chief International Correspondent for CNN.

What communication tools can’t you live without?

Contact with people. Being a journalist is about telling people’s stories!

The biggest challenge is to keep up with technology and the way it’s changing journalism. There’s a constant need to keep challenging yourself and adapting to stay ahead of the curve, especially when it comes to social media because that’s a big part of how we now communicate with our audiences. Any resistance can be a real set back. I also see this as one of the biggest opportunities. If you embrace new technologies you can access new audiences and have a global reach.

Tell us about the news coverage that you’re proudest of?

My proudest moment is providing live coverage in the aftermath of the 2008 Mumbai terror attacks for BBC World News. As someone who was born in Mumbai, and has family in India, I was proud to be able to highlight the enduring resilience of Mumbaikers.

What’s been the biggest change to the newsroom since you began your career?

What should every aspiring journalist read?

BBC World News have an outstanding standard of journalism. I think you can learn a lot from their style of writing and their online journalism school has some great tips – and it’s FREE.

What tips do you wish you’d known before starting out in journalism?

Trust yourself. I lacked confidence when I first started out in front of the camera and one of the best pieces of advice a senior producer once gave me was talk to the camera like you’re talking to your best friend. I’ve followed that advice and never looked back.

Finish this sentence: ‘Communication is…’ POWER